Colonel Merrie Knightly's Civil Air Patrol career began in September of 2000 when she joined the 35th Composite Squadron in Bangor, Maine with her husband and then 13 year old son. At that time major changes were happening in the Emergency Services area of CAP and the squadron needed an Emergency Services Officer to usher in these changes so Col Knightly volunteered to take on the task.

After guiding the squadron through the ES changes Col Knightly was asked to move to the position of Director of Emergency Services for Maine Wing under the mentorship of Lt Col Larry Wood the Director of Operations. After Lt Col Wood's untimely death she took over as Maine Wing Director of Operations where she lead the wing through several successful Air Force Evaluations and Guided Training Exercises including two Outstanding ratings.

In 2006 the new Wing Commander, Col Christopher Hayden asked Col Knightly to be his Chief of Staff for Maine Wing where she served until being invited to take the position of Northeast Region Vice Commander North serving the Wings of Connecticut, Maine, Massachusetts, New Hampshire, Rhode Island and Vermont.

Qualified as an Incident Commander, Col Knightly has lead many missions for the Air Force Rescue Coordination Center and been the Liaison Officer for one actual air craft accident in Maine Wing working with the Maine State Police.

Col Knightly has attended many CAP leadership trainings including, Region Staff College, Inspector General College and National Staff College. She has a Master Rating in Emergency Services and a Senior Rating in Plans and Programs. Col Knightly is also a member of the NER Critical Incident Stress Management team.

In February 2010 Col Knightly achieved her Level V and received her Gill Robb Wilson Award, the highest level of training for Senior Members in CAP.

Col Knightly is married to Lt Col Ken Knightly, NER Inspector General. Their son Scott is a former C/Maj, now an Officer and a member of Florida Wing serving as the units Communications Officer.

Colonel Mark A. Lee joined Civil Air Patrol in 1982 as a cadet, with the Philadelphia Composite Squadron 102.  As a cadet, he held every position on the cadet staff.  He commanded two Pennsylvania Wing Drill teams and competed in two Region Cadet Drill competitions.  He completed phase four of the cadet program and achieved the grade of cadet Lieutenant Colonel.    He assumed command of Squadron 102 shortly after becoming a senior member.  After successfully completing his term as Squadron Commander  Colonel Lee then moved on to serve as the Cadet Programs Office for Pennsylvania Wings Group 10 and as Deputy Commander of Group 3100.  He then went on to serve 5 years as the Northeast Region Director of Finance.  Colonel Lee returned to PA Wing and served as the first Director of training for the Wing.  He then served as the Pennsylvania Wing Chief of Staff and Vice Wing Commander.  Colonel Lee served as the Pennsylvania Wing commander from 2007-2011.

He is a CAP Pilot and holds Master ratings in Cadet Programs, Command and Safety.

He is married with two children and lives in Philadelphia Pennsylvania.

Lt Col Magee is the New York Wing Vice Commander and Director of the 2018 Northeast Region Staff College.  He joined CAP as a cadet in 1967 and completed the cadet program.  He served as cadet commander of the NY Wing Encampment and was named the Outstanding Speaker at the Cadet Officer School.  He completed the Professional Development Program and received Gill Robb Wilson Award #142.  He has served as a Group Commander, Wing Finance Director and Wing Chief of Staff and he was recognized for his work with inner-city youth and the cadet program and awarded the CAP Distinguished Service Award.   Lt Col Magee is a retired supervisory agent who spent thirty-two years with Federal Law Enforcement.  His last two decades were spent with US Customs Aviation.  He is a rated CAP Observer and has been married for over forty-one years to his wife Cherie, a former cadet. 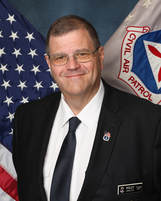 Col. James Allen Ridley, Sr. is the Northeast Region (NER) Chief of Staff and former Commander of the Connecticut Wing, U.S. Air Force Auxiliary.  As the Region Chief of Staff, he is part of the region command staff and is responsible for leading the region staff, the NER Promotions Committee, and represents the Region Commander at events when requested.